Stunning scenery, fascinating culture and the difficulties of tourism...

Many travellers I've met since I left in November have told me that I'm crazy for travelling India. Sometimes they insert 'on your own' into that sentence, or some people just don't understand why you would ever want to go there. I had decided that I'd ease myself in with a tour in the north, before continuing my travels in the south. I have a love/hate relationship with North India, for the reasons you'll come to understand below. But just in case you don't get to the end of the blog...it's a place you should visit if you want an eye opening travel experience. I'd also like to sneak in by saying that my experience of South India has already been very different to that of the north- but we'll leave that for another blog entry!

Expect the unexpected...all the time!
India is a people watchers dream! Cows and bulls casually roam the streets everywhere, even once into a shop. When walking along we've seen rats fall off roofs into the path in front of us, crowds of men watching the cricket on a shop TV and a huge pile of rubbish on the Main Street of Old Delhi as the street cleaners were on strike. One day, a whole electricity box on the street blow up in front of us with a huge bang, a blue flash of light and sparks flying everywhere. Just a standard day in India... 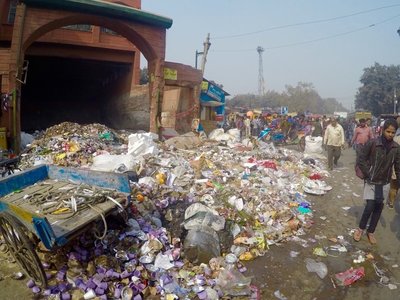 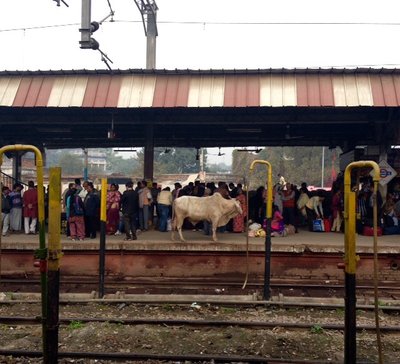 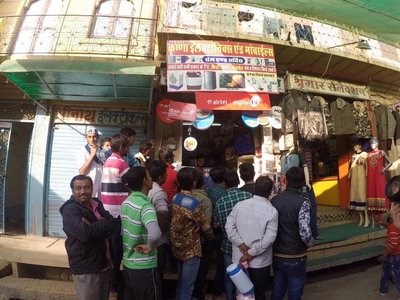 Women in India
Within 5 minutes of leaving Delhi airport, I saw a bumper sticker saying 'Respect and safety of women is my duty and honour'. India certainly has its problem with treatment of women at times, but let's start with remembering that it's not the majority of the population who have this attitude.

India is trying to take steps to make it safer for women. As bizarre as it is to be standing under a bright pink sign with stars on it, that says 'women only' at the metro station, I'd rather put my gender-stereotyping issues with a pink sparkly sign aside and have the option to be in that carriage. Some Indians clearly aren't used to seeing westerners and they are curious. However it's when you are alone or in smaller groups that the stares can turn into comments which can be unpleasant. You can't really win because in Indian culture eye contact and a smile can be seen as you giving a signal you are interested, but ignore it as I did one evening when I was on my own and I was accused of being rude and shouted at for not seemingly stopping and talking to this overly aggressive man in a dark street. But as I said for every person out there like that, there are many many more who are not like that and I came across many pleasant and helpful Indian men whilst I was there. 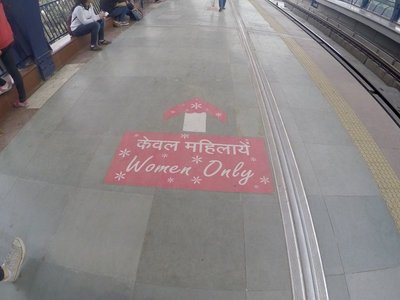 Tourism and poverty
Poverty in India is a tricky one, especially in areas with high tourism rates. In a country where 70% of the country live on less than $2 a day I was always expecting to see poverty. That doesn't make it easy to see though and I've lost count of the number of times I've tried to weigh up the pros and cons of tourism here. I still don't know the answer! All I know is that by spectating and not interacting, you are going to contribute to social issues relating to tourism. Seeing a tourist push their camera in front of a girl (no older than 10) walking to school was pretty jarring. Some people really will do anything for a 'good' picture, without giving thought to the other person involved who was probably scared that a grown man had just jumped in front of her. Why do we think this is acceptable in India when it wouldn't be in our own countries? You also have mothers dressing themselves and their children up so that tourists will take photos, and they will then ask for money/send their children to beg. It's a very harsh way of living for some local people in areas where they see a lot of international and domestic tourism. The interactions that do go on with those not directly employed in the tourism sector lack depth and therefore damage the perception that both sets of people have of each other.

On the way to the airport we had a taxi drive into the back of ours. It wasn't a full blown accident, but enough to break our rear bumper. The driver said that the insurance wouldn't pay out. When I tipped him 30% he was unhappy as he said he had already lost thousands of rupees with the accident. Unfortunately this seems to be the general attitude from people involved in tourism. You have to barter hard to pay less when you know it's still double or more what a local would pay. When you tip, my experience in some cases is that people complain to you that it's not enough. You have to be assertive or you'd lose all your money in days otherwise! Of course, everyone is just trying to make money at the end of the day, however it does make being a tourist challenging and ultimately puts some off returning.

Being ill in India
Don't worry I'll spare you the full details. After 7 days of being unwell (the inevitable along with a few more unusual symptoms), and one course of antibiotics that hadn't worked, I decided to go to a doctor. This involved being taken to an Indian hospital where I saw a doctor (apparently - he was just in jeans and a t shirt) who was confused with my relatively simple issue, so referred me to a surgeon on the floor above. Seriously! I had to wait just at the side of an operating theatre for this guy to finish an operation before he came out and spoke first the patient in front and then me. There's no privacy as you have your consultation in front of everyone else. The cost of seeing a Doctor and then a Surgeon? 60p. Can't complain at that I suppose. Although when they then prescribe you half of the pharmacy, it's a little ridiculous. Especially when you are the type of person that doesn't normally want to take paracetamol and they wanted me to take 43 tablets within 5days! The whole thing definitely cheered me up though and it was interesting to see the A&E department and wards etc.

After day 12 of being ill, I was still no better so I decide to see another doctor. This one basically told me that the tablets I'm taking are making me unwell. Given the amount of them I'd be inclined to agree with him. So what does he do? Prescribes me another 4 types of tablets that are different!! I'd love to say that sorted everything out but it didn't so I had to demand to have a test to try and determine exactly what was ruining my trip! The good news is that after 17 days I was feeling better again! The test results came back (two weeks later) showing I had E. coli in my system, so that wraps that episode up.

Intrepid tour and destinations
I was on a tour with Intrepid and we did a pretty standard loop of North India. We visited Delhi (crazily busy), Jaisalmer (beautiful fort with gorgeous views of the sunrise/set), Jodpur, Udaipur (very romantic city with a stunning palace), Pushkar (I didn't actually get to as I was too unwell to travel), Jaipur (the 'pink' city, that's not actually pink), Bharatpur (relaxing nature reserve), Agra (the incredible Taj Mahal) and Varanasi (favourite place by far on the Ganges). Over that time we did tours of lots of forts and palaces, had an art class, saw a prayer ceremony on the Ganges, and drank lots of lassies. 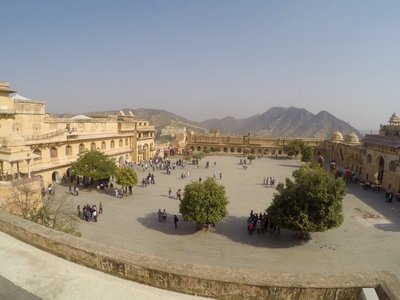 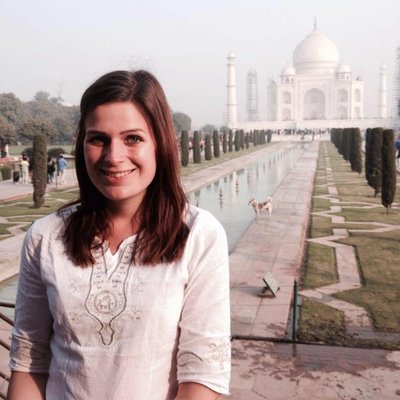 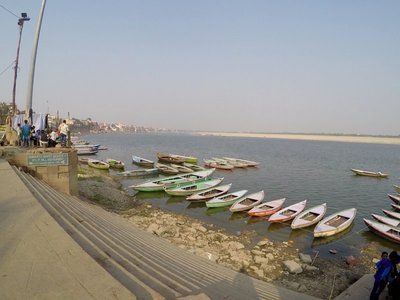 We largely got around by auto rickshaws (record of 7 people in a 3 seater), buses and sleeper trains, all of which provided their own experience.

My North India travels come to a halt as I woke up the day my tour finished, had no plans for 10 days, so booked a flight to Nepal for that evening. After Nepal, I'll be back to South India for a couple of months.

It's hard to summarise the country it's just so different to anywhere I've ever been. You have to be on your guard all the time when you are out. Mainly because you are trying not to step in large piles of rubbish, cow shit, actual cows, dogs, goats, monkeys, people, food carts, bicycles, motorbikes, rickshaws, cars or tuk tuks. You certainly can't describe North India as relaxing. But it is fascinating, has some incredibly beautiful cities, lovely people and amazing buildings. A must for those who don't mind travels at 100mph, near death driving everyday and can see a place behind all it's rubbish and dirt.

For those that would like to see the footage from this part of the trip, the link is below ?