Probably the least prepared trekker that's ever visited Nepal, but the best things are often unplanned...

Rocking over to another country on a whim is the stuff I live for. I've always loved being spontaneous so waking up, booking a flight to a country I know next to nothing about, and arriving there the same day is pretty damn exciting.

I checked into my hotel in Kathmandu late at night and then spent the next day arranging a last minute trek. I found an agency, told them where I wanted to trek and they organised a last minute tour guide for a 5 day Poon Hill Trek. I met the guide very briefly, before grabbing some food and having an early night.

Day One
I meet my guide at the agency at 6.30am. He had forgotten my name since yesterday. I'd also forgotten his. In the ten minute walk to the bus my right shoe was rubbing, my hired bag wasn't sitting right and I still felt sick, as I had been for the last 15 days. I also had the realisation that I've signed up for a 5 day trek with no clue how far in going to be walking each day, or in total. FLYING START.

I could write a whole entry on the bus journey alone. I couldn't take my eyes off the view and activities outside. In seven hours I didn't need my iPod, kindle or phone. I was totally content watching the world go by. Close to our destination (Pokhara), the bus comes to a stop in a huge traffic queue. It transpired that there was a protest outside a police station and the protesters were blocking the road and it was going to be at a minimum a few hours before anyone moved. We had to get my permit and TIMS (Trekkers Information Management System) card before a set time and it meant we would miss it. When my guide asked if I wanted to walk through the protest and try and catch a local bus, I wasn't going to say no. One protest, some walking and two buses later we arrived with 10 minutes to spare! Gotta love a bit of ad hoc adventure!

Day Two
Another early start as we drove from Pokhara to the start of the actual trek. After 10 minutes i had lost my sleeping bag liner. As I realised, a helpful Chinese tourist told me I'd dropped it a bit further back. Um why did you not pick it up and tell me?! After a quick search, we never found it and my Nepalese tour guide said 'We have a habit of keeping things we find'. That was that then! 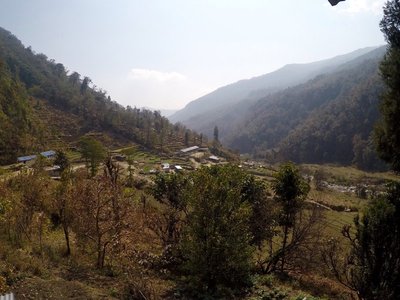 We trekked for 3 hours or so and saw the most beautiful river, waterfall, mountains and villages. Honestly it was incredible. It was bloody hard work though. Trekking in Nepal isn't something people take lightly, for example most people wouldn't do this if they'd been ill for the last two weeks or haven't really exercised regularly in months (who am I kidding...in years). But those that know me, know I'm determined when I want to be and don't give up. Whilst I'm beating myself up and wondering what the hell I've let myself in for as we hike up a steep track, my guide interrupts my thoughts and says 'you walk very fast'. I thought this was hilarious but then realised that actually we had been over-taking people and no-one had overtaken us yet. Not doing so bad after all! We stopped for a quick lunch and then kept hiking. As we'd made good progress, we decided to do an extra hill before finding a lodge for the night in Urelli. This hill had over 3,700 steep steps and it was 26degress. It was seriously hard work for about 2 and a half hours and was one of the toughest things I've ever done physically! Getting to the lodge felt like such an achievement and on the roof terrace I sat there with a cup of tea feeling pretty pleased with myself. My room was £1.59 a night and the view from my window was insane. I seriously love this country! After meeting a Tibetan woman on our mammoth step hike, she decided to stay at the same place and taught me some Tibetan dance moves which was fun. After eating a classic Nepalese dish I headed for an early night.

Day Three
I looked out of the window and was greeted with the incredible view below. If there was ever motivation to get out of bed that was it! I had breakfast whilst looking over the clouds and then set off. 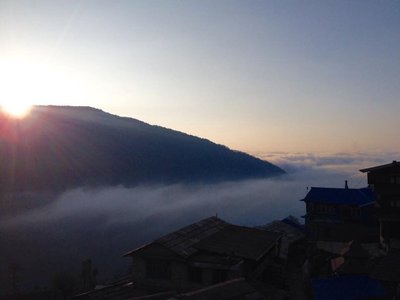 There were quite a few more steps involved and the route goes through a few remote villages (if you can call 5-10 lodges in clusters a village). The rest of the day was through forest with waterfalls and streams along the way. We were now a long way from any roads or proper paths. So we would see groups of donkeys loaded up and being led along the path back down to where we started to stock up with anything from food to gas. 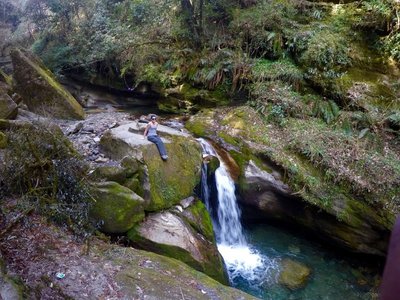 By 12.30pm we had arrived in Ghorepani and I ordered a pizza as I felt it was deserved. Rather frustratingly my window would have had an even more impressive view today but it was cloudy and dark so I couldn't see the himilayas as I'd hoped. The afternoon was spent relaxing and reading.

Day Four
We woke at 5am and was out trekking by 5.30am...in the pitch black. We were trying to reach the summit of Poon Hill for sunrise. After a gruelling hour of constant steps we made it! Pretty happy to be at the top but the view everyone does this trek for was completely covered by cloud. I certainly took this better than the group of American school kids (!). The sun came out from the clouds for about 12 seconds and promptly disappeared so we were left very cold with no view. I had a cup of tea at the summit though to make myself feel better! 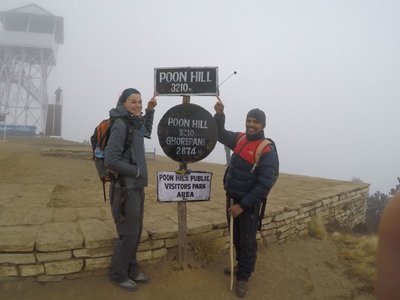 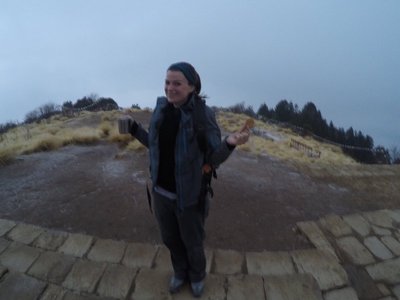 I strangely found the whole thing quite amusing, rather than annoying, and we headed back to the hotel for breakfast. The weather was supposed to be clear by 3pm so I decided to stick around and use the extra day we'd planned in to see the views if possible. The rest of the day it rained, hailed and the weather just got worse!

Earlier, at around 10am news had broken that a passenger plane with 23 people on had crashed very close to where we were. We could hear and see the rescue helicopters and see some smoke through the clouds. It's really so sad that the plane was ever allowed to take off given the poor visibility and terrible weather, as you can see in the photos above. Nepal doesn't have a very good safety record for flying, and a few days later whilst I was still there, another plane crashed killing both pilots. It was another of those days that really gave me some perspective.

In the evening I ended up being sick and was feeling pretty terrible so told my guide that I wanted to skip the 5am start (I'd been hoping to try the summit again the next day in the hope of better weather) and just sleep in and carry on tomorrow. He said that was fine...

Day Five
At 5am I get a knock on my door from my guide informing me that the weather is good so the views will be great. What could I do? He'd clearly not understood me yesterday, but I felt better. I got up, trekked up all those stairs again, managed to take 15 minutes off my time yesterday, and was rewarded with incredible views!! 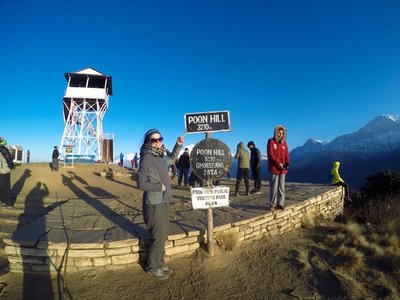 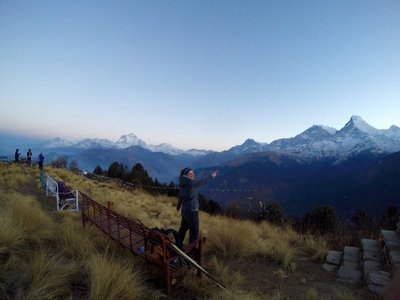 The views continued to be incredible throughout the day and I was literally on cloud nine. The trek was mainly downhill but not without its tough uphill parts. We walked along a ridge with gorgeous views, then spent a lot of time in forests with waterfalls everywhere. All in all we trekked for over nine hours and I was totally shattered when we arrived at the guesthouse for the evening and was asleep by 7pm! 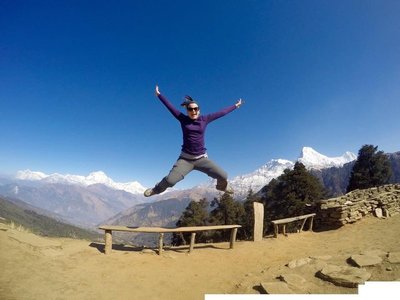 Day Six
Ouch. Ouch. Ouch, I woke up at 6am with painful legs and my knees hurt so much. Still, it was the last day so no stopping now.

I seriously had to dig deep as my right knee was in serious pain every step down I took. Oh and the first TWO HOURS were downward steps. After a while I opted for the option of a dirt path down, which added another two hours into the day. By 1pm we arrived back where we had started and I'd finally finished the whole loop!

After a bit of a drama as to how we were getting back to Pokhara (the main town where we would be staying), we got back and I treated myself to a fresh apple juice and egg baguette. Trek complete- queue crashing out at about 6pm.

Day Seven
The next day we took the seven hour bus back to Kathmandu. Sorry did I say seven? I meant 10 hours. We got delayed by queues for fuel blocking the roads, a lorry that had crashed and general traffic related issues. I did establish though that Saturday in Nepal is laundry day. The rivers were full of people doing their washing and riverbanks were really colourful with all the items drying.

I met up with Casmira and Maaike (who I had done the Trans-Siberian Express with in November) and we went for a meal and explored Kathmandu the next day. All in all going to Nepal was the best decision I've made whilst travelling. Days in silence gives you a lot of thinking time and I've come back with a clear head ready for more travelling. I've proven that I can trek longer and harder than I initially thought I could and seen the beautiful Himalayas in the process. So if you ever need a boost of self-confidence, a thorough workout and want time to think things through - a trek in Nepal with sort you out!

Facts about Nepal
1) There's wifi on tourist buses
2) Electricity is only on during set times during the day
3) There's a huge fuel shortage (due to strokes on the Indian border), so queues for fuel are hundreds of bikes and dozens of vehicles long
4) Rebuilding is still ongoing after the earthquake last year
5) You have to go trekking there!