The arrival of refugees by boat (Molyvos)

I feel I have so much to share but am trying my best to keep this to a minimum and interesting.... It's much harder than I thought!

I have taken a few photos of camp Moira at Mytilini, to show you the conditions. One guy has travelled from the UK and set up a welcome stand. Refugees were arriving at the camp with no idea of where to go, what was where etc and there is no information point. so he drove to the island and set up this stand explaining where things were, what they needed to do and current border sits ruins. Such an amazing idea!!! 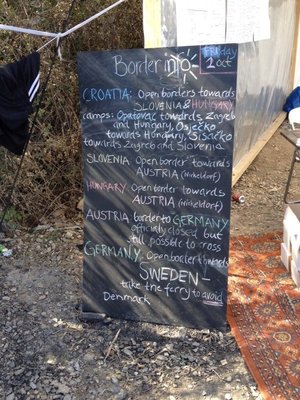 Photo: Info board at welcome camp re border crossings 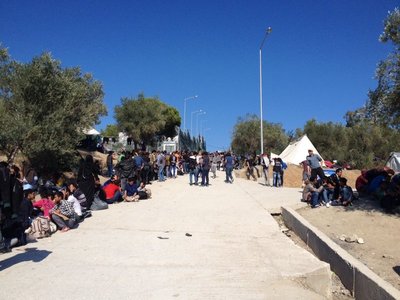 I met another volunteer, Aliki, and we decided to hire a car drive up to Molyvos, which is the northern point of the island. This is the closest point to Turkey and therefore the place where the overwhelming majority of refugees boat landings are. About half way there (45 minutes in), we began to see groups of refugees walking back to Mytilini. They had decided to walk 60km in the baking sun, rather than wait for a bus. The other possibility is that there boat landed where there were no volunteers and they were none the wiser that buses were being put on for them. It is illegal to transport refugees here (as they have not been through the registration process at this stage), without prior agreement, so many locals/tourists are unable to help. We had no supplies with us, so we were unable to hand anything out.

We got to the section of dirt track which follows the 3 miles or so of beach where most boats arrive. I have no idea how the tiny car we had rented managed to go along it in one piece as clearly this road is meant for jeeps and 4x4s!

Along this stretch were dozens of deflated boats and hundreds of life jackets. 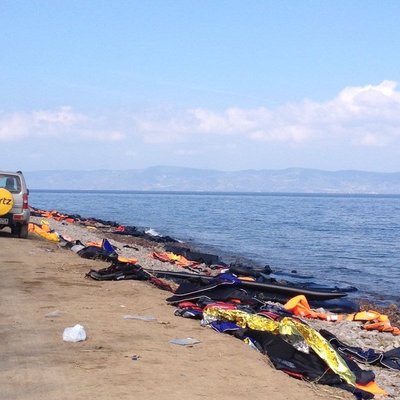 Photo: boats and jackets along the beach from Skala to Eftalou 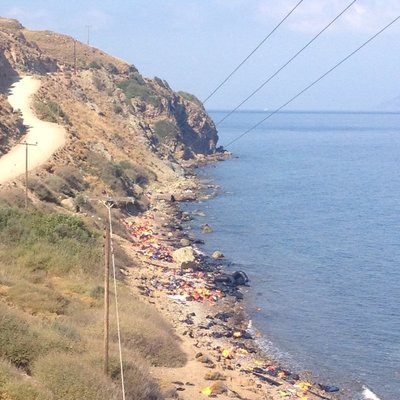 Photo: view from a cliff of hundreds of life jackets

It was incredibly surreal to see so close and there were refugees who are being helped off the hosts by volunteers. This part of the island is seeing 50+ boats a day and is getting busier and busier as people try and cross before the weather deteriorates. To put the numbers into perspective, over 73,000 refugees arrived in September to this island alone. 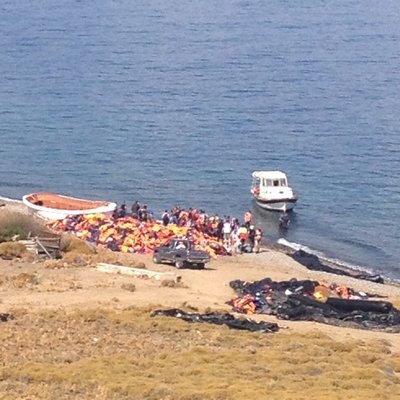 The next day we helped sort through some clothing donations in Molyvos, which are then taken to the beach so that refugees can change into dry clothes when they arrive. At about 4pm we went to the refugee 'camp' at Oxy. I say 'camp' as it was designed to be a pick up point for refugees to be taken by bus to Mytilini so they can be registered. This area has a few UN tents for shelter, but it is being run by a volunteer group, which we have now joined. The place is a dirt area, with a road on the edge, with a cliff face after that. I cannot even try to describe the conditions, it's not a place for adults to be, never mind children. It is probably designed to hold about 200-300 people. On this day it was holding thousands as police had ordered that no more refugees could go to the registration camps in Mytilini due to overcrowding. It seems the police had not considered the bottle neck that would cause in Oxy.

This ultimately led to 2,000 people sleeping along the side of this road. One of my jobs was to go along and tell all the families at about 6/7pm that they were going to have to sleep the night there. People looked at me and asked where, I had to point at the ground and say here. We could take women and babies into one tent to try and give some cover, but young children and hundreds of families were still outside. It is very cold at night and it was heartbreaking. Some asked if they could stay in hotels as they had money, but they cannot as they are still not registered. At about 10pm we had some blankets delivered and we went around in the pitch black trying to find children/babies/pregnant women who were sleeping with no blankets and cover them. We also handed out sandwiches and water to those still awake. We finished just after 1am. That was hardest day so far. There were no NGOs present here- this was all co-ordinated and completed by volunteers. Although there are a few UN tents here, they are not present or running the camp at the moment.

The next day was similar, although we sent buses to Mytilini with 3,360 people, which was a great number! These buses are all paid for by charities/volunteers/NGOs. The next night though, there were still about 1,600 people sleeping overnight.

Since being in Oxy I have spoken to a number of refugees. One refugee from Afghanistan is 19 years old, been travelling for four months to reach this point and just wants to carry on his education. He was particularly helpful with translating!

The refugees can see we are volunteers and some are also helping with organising lines etc, which is a massive help. Even when we have to give difficult messages to people, they still thank you for telling them what is going on. Given the situation they are in, I don't think I've ever met people who are so patient- even if queueing British style is not something that comes naturally! They are given a sandwich, a piece of fruit and a bottle of water when they arrive. On a few occasions I have been offered food by the refugees as a thank you as they can also see we are hot and tired. Of course I have declined, but it's very touching when they have hardly anything but still want to thank you and share what they have.

I have a stinking cold, but I really couldn't care less. This is without a doubt the most worthwhile thing I've ever done, and whilst I don't expect appreciation, you get it from people everyday.

This morning I read the BBC news article about Theresa May concerned with integration of refugees and migrants into society. A group of us were discussing the cultural differences yesterday and how it will be hard it will be for some people to adjust. We all feel very strongly that by welcoming these people now in this way and doing everything can do, smiling, showing them kindness, the process of integration will be much easier for them. They will start to trust us. By ignoring them and not caring it will only lead to resentment and further separation down the line.

Oh and the country everyone wants to go to? Germany. Not a single person has mentioned the UK to me....

Hi Poppy
Loving the posts. Keep up the good work, sounds like your doing a great job xx

Great job- keep it up. You are all making such a difference each day to so many. xx

Well done Poppy! Great read and fantastic job that you guys are doing over there x

Hi Poppy, that was such a good read. Keep up the good work.

So proud of you. Pleased that you are being appreciated.