Remembering the positives, along with the negatives

My final blog from Greece...

This is my last blog about the refugee crisis in Greece, as I've just landed back in England. There are a few last things I would like to share if you have the time to read through.

Last week we had a day that was very quiet, with hardly any boats arriving- and it appears it was very much planned that way by the authorities. The Greek Prime Minister was on the island to see the crisis and to see how everyone was coping. It turned out the Turkish coast guards stepped up their coastguard patrols and stopped ALL boats arriving on Lesvos. They also sent four large boats from Lesvos to Athens to clear a number of the refugees from the island, so that it looked like everything was under control. This meant that at about 11pm there were about 10-15 boats that arrived (approx 600 people) in the pitch black after the coast guard had stepped down for the day. I was so angry that people's lives are put at risk even further just to try to conceal things for political reasons.

The next day I started at 7am, but it was also quiet with only one boat arrived in the morning, as the Turkish coastguard is still preventing all boats from crossing. I took a break at about 2pm and I had a quick power nap before heading back at 6pm. When I arrived at Oxy camp there were only about 100 refugees and everything was a bit quiet. So the ex-brownie leader in me decided to get some people together to play a game as I had found a football! I went round and found people who wanted to play, set up two goals and refereed a football match. I know- I think it's hilarious too. It was really good fun and after one yellow card for a handball and two penalties (for when the ball was accidentally kicked over the barrier so the ball had to be searched for over the cliff), the game ended and everyone was happy. 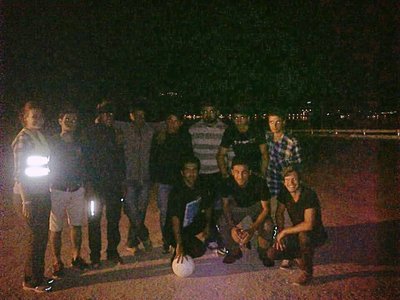 The night became busy from about 10pm when quite a few boats arrived. I was in the food tent so was taking people's food tickets (which we give them for free when they arrive) in exchange for food and water. One father was doing a very impressive job of balancing his child on his shoulder whilst holding juice and posing for the photo! 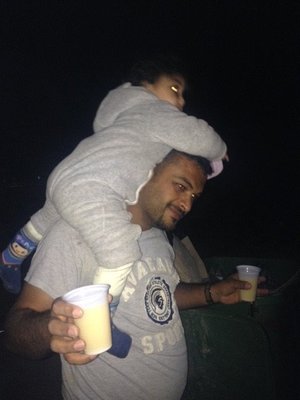 By about 2am it was very quiet again and most refugees were asleep, so we closed the good tent and headed home...only to hear that four more boats had arrived (approx 200 people), so we quickly turned around again! The extra problem with night time crossings is that everyone turns up wet generally from the waist down, including children/babies and it is very cold. They are shivering so the race is usually on for all available cars to pick people up so they didn't have to walk for two hours. When they get to Oxy we quickly give them food and dry clothes. On this evening, I finally got into bed at 7.15am for some much needed sleep.

One morning, after we had bussed everyone to the registration camps, we had an empty camp. It's fair to say that the camps were covered in litter and bedding, so we all got stuck in clearing up the rubbish, to make it more pleasant for when the next set of people arrived. 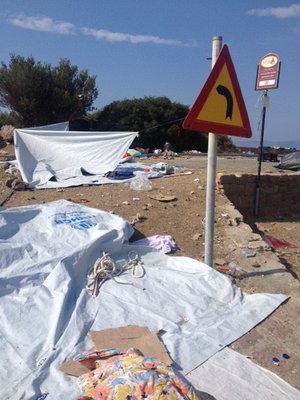 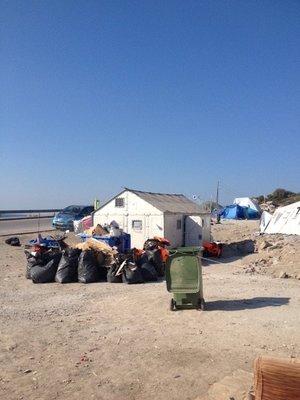 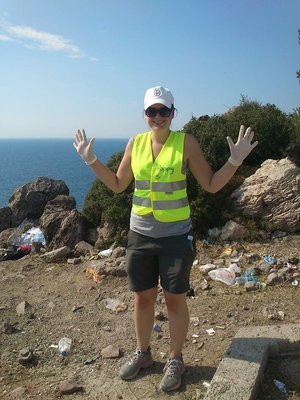 Photo: Evidence that I got stuck in for those who may not believe me 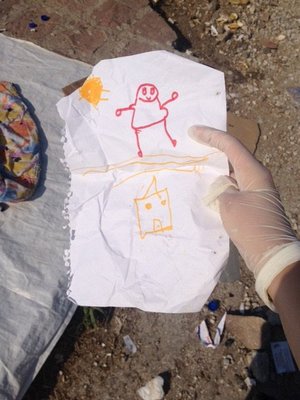 Photo: I found this whilst cleaning up...a great example of a picture painting a thousand words 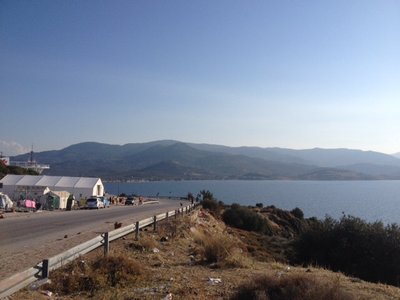 Photo: The camp has a beautiful backdrop

Another evening a man stood with me in the clothes tent and helped translate. He stayed with me until 3am, helping translate for when I needed to move families into tents, describing symptoms of sick babies to medical professionals and other situations. He even went and came back with a tea for me! He used to run a factory in Syria and was a successful business man, he has sold his house and is now travelling to Europe with his family where he wants to be able to set up his own business again in a safe country.

One more myth to dispel is that refugees are coming to Europe to claim off states and take all money. All I have experienced is refugees being helpful and hard working. When I was cleaning up litter the other day, a man from Afghanistan came over and asked if I would like some help. He grabbed some gloves and a bin liner and got stuck in. I thanked him and he just said he was pleased to be doing something. He used to translate for the British Army in Helmand Province and other areas, until he was shot in the foot and felt it was no longer safe. If these were Americans and Australians, would our reaction be the same? Would we doubt their intentions? Assume they aren't really in danger and that they are just milking it to get benefits? I very much doubt it.

In my first blog, I said I was uncomfortable about being surrounded by tourists, given the current crisis. I have changed my perspective on tourism since first arriving though. Tourism is so so important for this small island. Without tourism, this island will suffer even more and some bookings for next year have already been cancelled. For people to be around to help refugees, we need the local economies to function, so tourists should still be coming here, but just need to be sensitive to the situation (and preferably spend a day or two volunteering) in my opinion 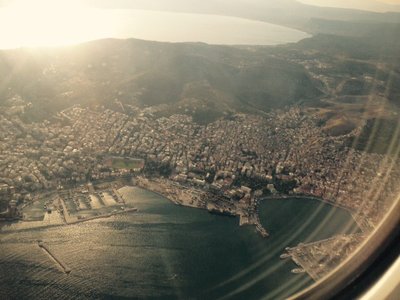 One day it was incredibly stormy (we struggled to walk down the road in a straight line, things were falling off buildings)! To our horror, some boats still arrived. Some mentioned that the people smugglers had been offering a discount from $1000 to $600, because it was so dangerous. This shows these people couldn't care less about safety. I was told of one woman who arrived a few days ago with a baby who was an hour old. She had given birth on the beach in Turkey and was told that she must still get on the boat. As soon as she arrived in Greece, a doctor was on hand to see her and her child. I could keep going with heart breaking stories that I've heard first hand from refugees themselves, but I think I've painted a picture by now.

On the flip side of all of these sad stories, I think it's important to talk about the positive experiences I've had too. Seeing people excited in the hope they can now finish their education, the joy on a girls face as she called her mum from my phone to tell her she was safe after being rescued from a sinking boat by the coast guard, the constant compliments and thanks that we've had from people who just can't process that volunteers care about them (as they have often been treated so badly, especially in Turkey), the few people I've met who I have swapped details with and will keep in touch with to see how they get on and one day hopefully meet again when they are settled in Europe, the girl of about 8 who came up to me and wanted to play clapping games, the language barrier not being a problem. The list of positive experiences is also very long and shouldn't be forgotten.

I've been lucky to be with the volunteer group 'Starfish' for the last 10 days or so of my trip. The volunteers at Starfish are amazing and the group are doing incredible things. Without this group there would be no proper 'welcome' to Europe for those arriving in the north of the island, often no food, no dry clothes and no transport to the other part of the island. If you have time, please read the article at the end of this blog where Melinda (who runs the group) was interviewed for Al Jazeera news, and she talks about the important role the group plays. This whole trip has been truly life changing and will stay with me for ever for many, many reasons. 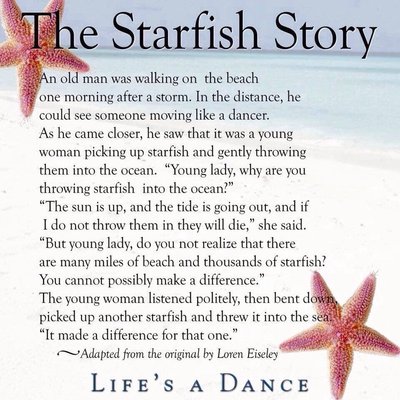 Photo: Why the group is called 'Starfish'

Finally a really big thank you for taking the time to read these blogs. I really wanted to share this experience and convey the realities of the refugee crisis, to share some of the stories of the people seeking refugee and to increase our understanding of why people are forced to take this route to safety. I've been able to do that because you have taken the time to read- so thank you ?

Well done! Great to read about the positives while capturing the essence of their struggles too. You will have made a difference. X