An country with friendly people, rich culture and amazing views....

We arrived at 6am into Ulaanbaatar, and got off an overnight train. We had thought that it arrived at 5am, so we're a little disappointed we'd all missed out on an hours sleep just because they hadn't changed the summer timetable on display to the winter one!

Ulaanbaatar
It was -25 degrees when we arrived, so for those who may wonder what that's like, it's bloody cold!!! It was made worse by the fact that the train had been a ridiculous 30 degrees, so we were dealing with a 55 degree change! We were pleased to find out that we could check into our hotel and grab a shower and some sleep before heading out for the day. Driving through the city, it was interesting to see how westernised some some things were. Opposite our hotel there was a 24 hour chicken takeaway place that has everything in English (including how to find them in Facebook through a neon sign)- yet there are no McDonalds in the country, which is pretty unusual. 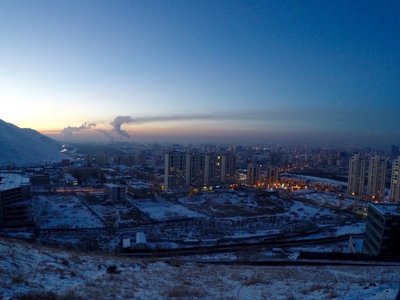 The hotel was very nice, so it was a surprise to be told that we needed to run the shower for 15 minutes as the water would be dirty and wouldn't be clean or hot until then!

On our first full day we packed a lot in considering we'd all gone back to bed. We had lunch, visited the state shopping mall (they had a Next clothes shop?!) and went to the Buddist Gandantegchein Monestary, all before 2pm. The Monestary was beautiful and had a massive Budda inside, along with hundreds of prayer wheels. It was explained to us that Mongolian Monks have different rules to other monks, as they are allowed to eat meat and have children. 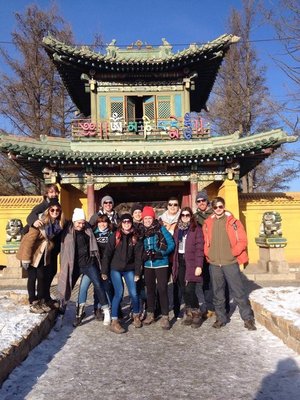 The next stop was The Black Market where Mongolians can purchase anything they need, from entire gers (the tent like accommodation they live in), to trinkets and washing machines. It was really interesting to look around, although I wasn't too keen on the number of animal parts you'd casually find on a stall that wasn't selling anything animal related! Taking the steps up to the mountain view point of the capital was well worth the view (also showing how urban and modern it is) and we then headed to the cashmere factory. Unfortunately it was a Sunday so the factory itself was not producing any items. I had hoped it would be opened as 100 women from North Korea work there, although we were told that the NK government take 50% of their wages. Obviously I don't speak Korean, but as most of you know, I'm just interested with North Korea, hence the visit later in my travels!

Terelj National Park
The next day was amazing! The bus took us out to see the Genghis Khan statue, which is the tallest statue of someone on horseback in the world. They also have the worlds largest boot on display...they do like to say 'this is the worlds largest/tallest/coldest etc' for a lot of things! The museum detailed the Mongolian empire and explained why Genghis Khan is such an important figure to Mongolians. It's clear that all Mongolians are very proud of their country, traditions and history and our honcho was always sharing her knowledge with us. 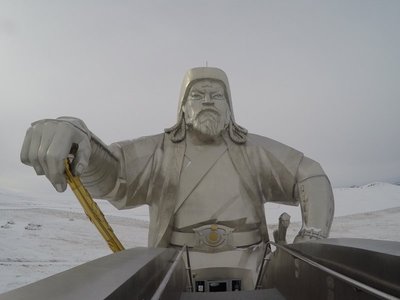 In the afternoon we arrived at the Ger Camp in the Terelj National Park, where we stayed for two nights. We stayed in traditional gers which are large round tents with four beds and a fire in the centre, where a lady would come in every few hours (including in the night) to keep the fire going. The scenery was beautiful and I don't think you could get bored walking out from your ger every morning and seeing the snowy mountains. 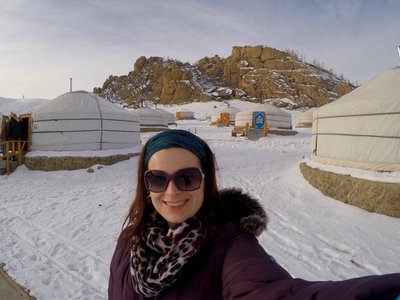 Activities that we did included watching the film 'The Mongol', walking up one of the steep hills to look down on the valley and ger camp, sledging and dressing in traditional Mongolian clothing. 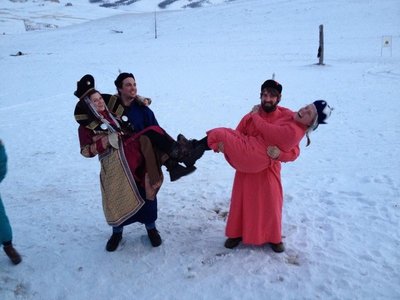 Inside the National Park there is a rock that looks like turtle and is aptly named 'Turtle Rock', so obviously this was a manditory stop on the bus to get a photo. 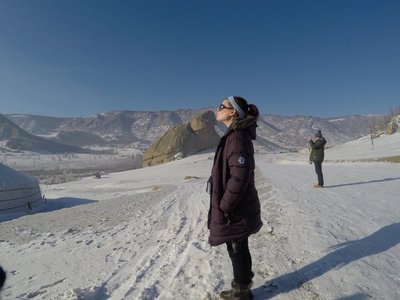 Horse riding through the national park was the next thing we did and I couldn't get over how beautiful the landscape was... 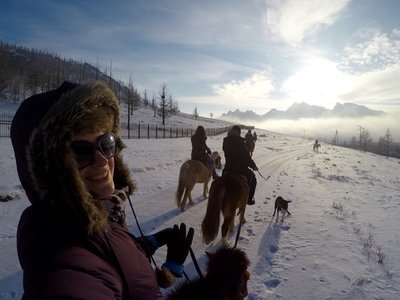 We then visited a nomadic Mongolian family. The lady made us all Mongolian tea and told us (through our honcho) that she had been a nomad for 22 years. The gers that they live in can be packed up in 30 minutes and some families move around 3-4 times a year. Children who live in rural Mongolia all go to boarding school from the age of 6 years, and this is funded by the government, leading to a literacy rate of 98% across the country. We ate traditional Mongolian snacks, which were interesting and certainly tasted quite sour. To quote my sister it was an 'I'll eat it but I won't have it again' moment! As for Mongolian tea, it's tea with milk and a lot of salt. Seriously. I drank some as I was really keen to try it and as the nomadic lady made some as she knew I liked my tea, I couldn't really not. I won't be recreating it any time soon! Treats and tea aside, I don't think I've ever eaten so well. The vegetarian food they cooked was incredible, including marinated tofu and fresh vegetables and it's fair to say even some of the meat eaters said that our veggie dumplings were better! 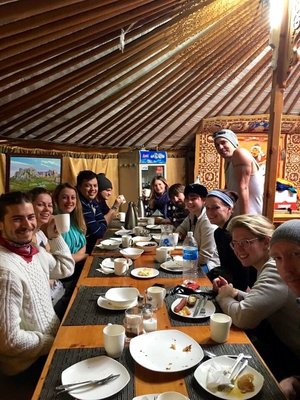 Mongolia is definitely a country I will visit again, it's not really on the traditional tourist map, but it should be and I think the photos speak for themselves. The scenery is incredible, the people are the friendliest I've ever met and another bonus is that you don't need to sort a visa. Their culture is so interesting and there are so many things to do and you have an amazing city to explore as well as stunning national parks within an hour of each other. Already looking forward to the next trip there as I'd like to see it in summer where it will be completely different again! ?

Random Facts I learnt about Mongolia
1) Ulaanbaatar is the coldest capital in the world
2) Mongolia has a closed currency, so money can only be exchanged in the country itself
3) The Mongolian empire was the largest land empire ever to exist
4) Mongolians have a saying that is 'those that built the Great Wall of China were great, but those who they built it to keep out were greater' ....seeing as I'm in China at the moment I'll leave that there....
5) 70% of Mongolians are under 38 years old

Posted by Poppy90 23:52 Archived in Mongolia

Mongolia would be unreal in summer,ill see you there

Absolutely fab to hear about your trip Poppy and see the fantastic photos. I have experienced -27 when we lived in Canada. You feel like your ears are going to fall off and your nostrils freeze up! Good luck with the rest of your trip. So many stories to tell.?